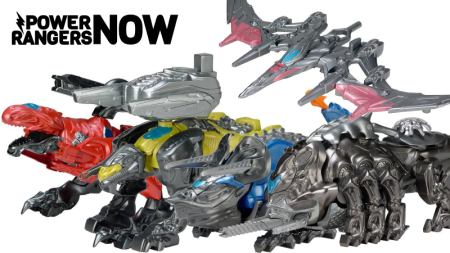 The first look at the individual Power Rangers Movie Zords has been revealed!

As part of Bandai’s Power Rangers Movie toy line, the pictured Battle Zord toys give fans the first glimpse at the Mastodon, Triceratops, Sabertooth Tiger, and Pterodactyl Zords that our heroes will pilot in the upcoming feature film (sneak peek at the Power Rangers Movie’s Putty as well, via Bruno & Mia).

Based on the prehistoric dino’s from the original Mighty Morphin’ Power Rangers TV show, each Ranger commands a Zord based on their respective dinosaur spirit, and together, can combine to form the mighty Megazord.

The Battle Zord toys each feature 2″ Ranger figurines, as well as action roleplay such as missile-firing ability. Fans who purchase all five will be able to combine the Battle Zords into a towering 2 foot tall Megazord!

Power Rangers Movie toys are expected to hit retail shelves nationwide this holiday season. And fans wanting a look at even more Power Rangers content can head to RangerNation.com.

RangerNation.com is the official Power Rangers fan destination. Visitors will have an immersive brand experience including first looks at Power Rangers products and announcements, plus social conversation, video content and more.